No – it's not a printing error!

Fiona is an avid collector of antiquarian first edition books, particularly the ones with the infamous early printing errors. She wanted to incorporate something similar with Dirty Weekend in Brighton, and so the first fifty copies have a deliberate misspelling – see if you can spot it. It doesn't change the meaning of the word and Fiona thinks it is fairly obvious, but no one has spotted it yet!

A free copy of her next book to the readers who send in the answer.

Fiona actually wanted to substitute an entirely different word, which was a bit naughty, but her editors would not let her...

The red dress is mentioned quite a few times in the book:

“Dana opened a wardrobe door and surveyed the contents. What to pack. Something lovely, but not sexy. Definitely not sexy. Don’t want to give Hugo any ideas or encouragement. She went through the rails, pulling out that dress and this top and those trousers. Put them all back in. Opened another wardrobe door and took out a silk dress. Red. Short. No good – sexy. She put it back in. Glanced at her mobile phone. No new messages. The word sexy, always made her think of him.”

The dress is a thread that runs through the novel and becomes symbolic:

"And with that Dana turned to face a rail of body-hugging, short lace dresses. She went to reach for a bright red lace dress. Her hand wavered. She left it hanging there. Instead, she picked up a very short, emerald green lace dress, with scoop back and off-the-shoulder sleeves. Perfect for tonight, she told herself.She left the red-for-danger dress where it was. For now.”

For the photo shoot our model wore a dress very similar to the one described in the book and she got quite a few curious glances on the day of the shoot, not least because it was 8am on a very cold day in early April, on the seafront.

The red dress appears as a black and white image in the book – except for the book covers where it is seen in all its technicolour glory. 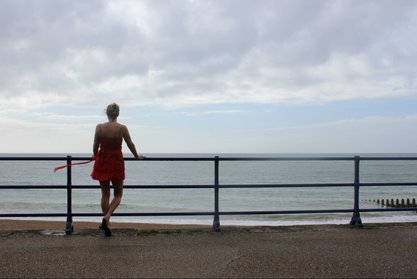 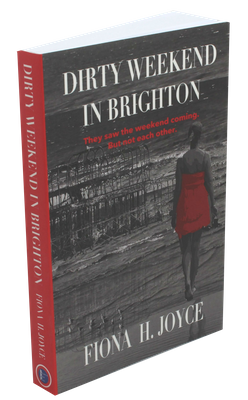 Curiously, the author makes a cameo appearance in the book – she fancies herself as a bit of a Hitchcock – see if you can spot her in the shopping chapter…

A poem that Fiona wrote, very privately and never intended for publication, many years ago, makes its way into Dirty Weekend in Brighton…

The little red dress was supplied by the lovely people at Jazz Vintage.